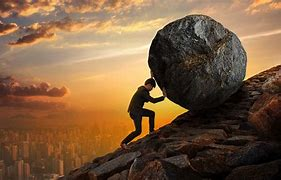 These are certain type of people who have it as their sole aim in life to be successful, make it big, go get it, trend the internet, sell millions of record; these see life as a success trip and have no other timeless values beside being successful. They spend all their time, energy, effort in trying to do, become, reach a certain height. They may produce impressive stuff: music, business, books, softwares, movies; but that success high cravings can never be quench. They are ever on an eternal chase from one high to another in the glorious vast dimension of success.

A little boy had a dream to become the worlds richest person. He was obsessed with success and started a business at adolescence because he thought the earlier the better. When he was twenty four of age he was already successful to an extent but felt he hadn’t begun to reach his true markings. He spent his twenties over- working himself in all sort of ways and had tons of business engagements and a growing income. He never saw what he had only what he didn’t have and the striving only increased because he wanted to be the worlds richest person.

When he clocked thirty he got married and at that point in life reevaluated what he had achieved. He discovered in the lenses of his own value “success” that he still lagged behind and swore before he was forty he would become the worlds richest person. His wife came to know of his obsession with monetary success and began to resent his endless working hours, endless trips, endless talks about money and business. She told him that he had enough and could cut down on his excess enthusiasm for extreme wealth.

He despised her caution and kept his ambition to become the wealthiest man alive. When he was finally forty of age and still not close to being the richest man in his country, he went into depression and despair of not being able to be that successful. His health declined out of more restless nights, endless work, starved nights of rest he imposed on himself. He finally died at the age of forty two and still wasn’t the worlds richest person. His wife knowing who he was decided to give him a grand burial and had his casket built in the form of a closet.

Inside the closet framed casket was a mahogany table and chair with a golden telephone set on the table. To cut the allegory short he was buried in his business suit_ seated holding a golden telephone. It was a dramatic way to be buried but his wife wanted to give a deep impression of him looking like very successful dead man. When we become obsessed with success we look like the person mentioned in the allegory, nothing is enough and we never feel satisfied with what we have achieved.

Sell ten million records and the next chase is fifteen million records. When fifteen million sales is reached the next high is twenty million records; there is never a moment of genuine satisfaction because success is the highest value in such life. Success is a trap just like failure because those two opposites are really one and the same thing. In failure you can despair and in success you can also despair. When we don’t understand what life is truly about we engross ourselves with pairs of opposites that ever swing back and forth like a pendulum.

In the end the best protection against becoming a success junky is to desire to act without any attachment to the result of such actions. Such practice will build an inner space that finds equanimity under the strong pull of success identifications which are very attractive, additive and mind consuming.