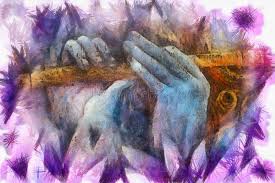 In the trance state of meditation I heard a flute note, a melody calling me into the unknown. All is quiet but the sound seemingly coming from an unknown place.

My eyes are closed yet opened. I see a fog of darkness with no end. And that melody piercing through the darkness as beacon.

From a distance I see an independent star. As I approached took the shape of a being neither male or female.

A vortex is seen at a distance sucking all in Sight. Hard gigantic matter the size of sun’s are swallowed by the whirlwind.

The star being moved toward the vortex and the closer we got I tried to back away but the pull became more compelling.

I remembered a passage: even though I walk through the valley of the shadow of death I will fear no evil. I thought this to be the valley of death.

As we entered into the whirlwind it encompassed my consciousness. I realized it was moving upward with multicolored hues of light.

We soon arrived the first portal greeting us with the sound of roaring thunder. I was frightened but caught sight of a mighty creature with what resembled the hammer of Thor.

It beat the ether vehemently and hence the clashes. His face was bright as a sun, on his features rest golden white beard and his eyes fiery.

The star being I journey with said that is Lord Elam, ruler of the physical plane. Whenever he beat the ether new universes are formed. From the clash of his hammer with the ether eruption ensue. What you men know as the big bang.

All was dark again with the close of the first portal. The whirlwind continued in its upward swing. After a considerable amount of time I began to hear the sound of roaring seas.

We entered into the second portal which was the astral plane a world more gigantic than the physical counterpart. The upper regions were much clearer and beautiful.

At the depth of the Astral world was mad confusion of people drowning at sea while others struggle for their lives. Wild cries from men, women, children as they battle with fierce currents.

The star being said those are the souls of men, women, children who do battle with the lower forces of the world. Few reach the shores after great exertion.

As the wild cries continued the darkness enshrouded the tormented voices. It was pitch dark and the force of the whirlwind continued to lift us higher.

Reaching the third portal there was twinkling from numerous bells. I could hear chanting of the words “mana” “mana” “mana” and I presumed this was the plane of the hidden manna but it was the causal plane.

I found myself in a large cinematic room in which I was the only viewer. A large screen was placed before me and in no time it started producing picture and sound.

I saw a general commanding troops, a woman sowing seeds on a farm, a young man traveling the desert in caravans, a monk sitting in a cell, a starved child sleeping in a desolate war ravished town.

Baffled I asked who are all these people and a companion replied those are some of your past lives. They added one upon the other to bring you to this point.

All was dark and the whirlwind began the upward spin with multicolored hues of light.

Something strange happened as we approached the fourth portal, I began to chant the words “Aum Mani Padme Hum” and felt recognition of knowing where I was.

Sound of running waters filled my ears and the stunning bright light. I found myself walking through a beautiful country with splendid groves. I reached a particular street and saw a beautiful white mansion by crystal blue lakes.

I entered the vicinity and completely felt at home. A woman with a blue body with pearls on her neck and hair came out and called to me rejoicing that I have returned from a long cosmic journey.

I told her I have a new home and this home will no longer be needed. I visited one more time to relinquish the bond of attachment to such a place.

As she gazed at me quietly the darkness interrupted and all the beauty of this magnificent plane vanished within the twinkle of an eye.

I felt both sadness and joy as I was lifted to the pinnacle of what I didn’t understand. There was lightness in my consciousness and a yearning for something I knew not what.

Buzzing sound of bees alerted me to the entrance of the next portal. The sound was so loud I thought I was going crazy.

My companion the star being said this is the world of intuition, the plane of the subconscious mind. It was like surreal art in which rivers hang upside down, mountains floated on thin air and trees looked like they possessed faces.

Everything seemed chaotic at first until we moved further into the heart of the dimension. The farther we journeyed things took shape, for this is the most permeable plane of all matter.

I found myself in a beautiful forest full of different tall trees, there before me was a track path. I followed it in what seemed like a never ending walk finally ended up before a small hut.

Ruby light emanating from the hut, so appealing in its purity and simplicity that I believed the most precious jewel was kept inside.

I opened the door and saw an old man of little frame sitting on a couch. He never bothered to turn his head for he was all seeing. This was the mighty SOHANG!

If you wish to enter into Atma Lok I am the door and as you journey remain absolutely fearless. He that you will meet there plays the flute. He is so mighty that words fail to describe, he is the first true embodiment of the living power.

SOHANG’S body became the light and the light had the appearance of a door. As I stepped into the light I was swallowed, destroyed and torn apart. My consciousness was dissolving becoming fragmented into many pieces.

I was in many places at the same time, seeing, knowing and being. At the burst of the light I found myself coiled naked within the petals of a huge flower.

New life in an old world of eternal love. I struggled to break free from the cord attaching my Soul body to the flower until it finally yielded and put me down.

A stunning looking fairy came to me and handed over a blue mantle that had stars from the lower world’s. This indeed is my mantle of victory.

As I wore the blue mantle I heard the flute melody and this time it was close. I felt the union between two lovers coming together after long separation.

At the sight of SAT NAM I felt the completion of every struggle.